Amit 21.1.20 0 Comments
The weekly WWE Monday Night Raw show begins with The Architect Seth Rollins appears alongside AOP and Buddy Murphy. Rollins interrupts those present, telling them that he thanks them for making him the man he is today, thanks to the boos. He thanks the support and faith of the WWE universe, and then comments that Murphy opened his eyes last week to join him. A video fragment is shown which reflects what happened the previous week. Thus, Rollins welcomes you to its stable. Rollins stops to comment that everyone who tried to knock them down has failed because they don't have the faith that is necessary. Leave the question open to all who want to face them, making it clear that they should indicate whether they are in favor of or against it. 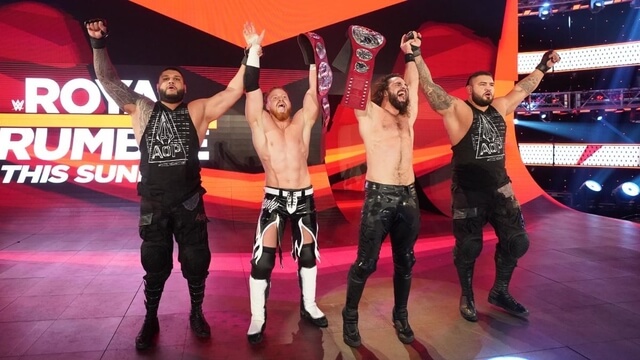 Then Kevin Owens and Samoa Joe interrupt the scene. Owens says they should be proud of having knocked out The Big Show, but that they have a "bigger problem" with them. Owens says stop talking and fight. Rollins interrupts him saying that they will have their fight, but not at the moment. Joe takes the floor and says they can easily approach him and give him his due. Rollins controls the situation and says he is a human being capable of forgiving. Rollins says that if the two are able to face them four, go and witness their destiny. Joe tells him it's not just two and The Viking Raiders arrive on the scene. Quickly the brawl begins in the center of the ring, with Owens and company cleaning the house.

Andrade (c) (with Zelina Vega) vs. Mistery King
Andrade and Mysterio think alike looking for the stairs and the masked man surprises Andrade with Dropkick against the stairs. Andrade reverses and punishes him to return him to the ring. They wrestle around the corner and Mysterio surprises with a Hurricanrana against the stairs. After commercials, they exchange kicks and Andrade fails to fall to ringside. Mysterio takes advantage of Andrade's fall to fall on him from the third rope. Mysterio dominates with kicks, Hurricanrana on the stairs to Andrade. Mysterio climbs another of the stairs and attacks Andrade to fall to ringside. Mysterio prepares the ladder to climb, but Andrade returns in time to take it out. Three Friends to hit the third on one of the stairs in the ring. Andrade prepares the stairs with the ropes, Mysterio takes the opportunity to hit him against the ropes. Andrade hits and applies a Powerbomb against one of the stairs. After commercials, Andrade charged Mysterio to punish him, but he reversed and threw him against ringside. Both are mounted on the stairs and are close to the title, Mysterio has the advantage, but Andrade reverts and both fall on the stairs in a spectacular way. Mysterio goes with Dropkicks on the ropes and 619 to leave Andrade out of combat. Mysterio takes the stairs and Andrade withdraws it to knock Mysterio down. Andrade seeks to tackle it, but he throws it at ringside and goes back up the stairs. However, Vega climbs the ladder and prevents Mysterio from taking the title while Andrade attacks him from behind and continues with a DDT on the ladder. Andrade takes advantage that Mysterio was knocked out and takes the title to win.

Black Mass and count of three.

It shows the F5 that the WWE champion applied to R-Truth, in addition to the participants in the Royal WWE Royal Rumble battle. Heyman takes the microphone, as usual, praises Lesnar and comments that Lesnar will eliminate all participants to become the winner. Heyman says Lesnar will leave number one and stresses that it doesn't matter who his opponent is since against Lesnar he will end up eating the dust. Heyman stresses that only a "beast" could be the winner of something like that, and that is Lesnar. Heyman also reveals that they were talking and came to the conclusion that there is no one in the current roster who can against Lesnar. Repeat your reasons and the audience boo. Then Ricochet intervenes in The Beast. Ricochet comments that some of the boys are afraid to enter a ring against Lesnar, but make it clear that he is not afraid. Heyman makes fun of Ricochet and tells him to return if he doesn't want to be hurt. Ricochet says he is not afraid to fight, and directly challenges Lesnar. Ricochet goes up to the ring and comments that he is not afraid to challenge him to a fight right now. Lesnar and Heyman decide to withdraw, but Ricochet asks if he is afraid. After the provocation of Ricochet, Lesnar returns and gives him a low blow to leave it on the canvas, Lesnar takes the microphone to tell him that "he is not afraid" & Lesnar leaves the Ring.

Initial key and they go to the corner. McIntyre mocks Orton and goes to the middle zone. Headlock McIntyre and knock Orton down. The Viper returns to the ring and receives him with a Headlock. Orton tackles him, and they get face to face, McIntyre takes the lead by attacking him against the corner and leaving Orton stunned. Orton clothesline on McIntyre to reverse, Orton also takes the opportunity to punish him against the barricades. McIntyre crashes him into the post and goes over Orton, but fails and pity one of the technical staff. After commercials, McIntyre takes momentum, but Orton manages to reverse and they remain on the canvas. Exchange of blows, without either being able to take advantage. Bumpers of McIntyre and Orton. Orton DDT and prepare your RKO. Orton fails and McIntyre knocks him down, McIntyre's Suplex and counts in two, Suplex and McIntyre recover. Orton reverses with Powerslam and counts in two. Orton hits McIntyre, but they go to the corner and replace it from the third rope by Orton. However, The O.C and AJ Styles arrive to interrupt the fight.

The O.C destroys McIntyre, but Orton arrives to help McIntyre with a steel chair, to cause them to retreat down the ramp. Orton threatens to punish McIntyre and they end up having care. However, Orton applies his RKO and leaves McIntyre out of the equation to complete the segment. McIntyre takes the microphone and goes to Orton, tells him that this Sunday he will kick his ass and that he will win the real battle to be able to star WrestleMania.

A recount of the rivalry between this against Asuka is made. The Man greets the Kansas public and tells everyone they did him a favor by allowing him to see things he couldn't. Lynch goes to Asuka and says he could face Kairi Sane easily. Lynch says they can break anything, but in Royal Rumble never again.

Sane scoffs at Lynch to start the fight, but the latter knocks her down and applies Dropkick to hit her against the barricade. On the other hand, Asuka distracts Lynch and Sane takes the opportunity to hit her hard. After commercials, Sane dominates with Headlock over the champion. Asuka watches the fight from the ropes. The Man recovers and begins to gain momentum. Exchange of blows, Lynch benefits and applies several Clothesline. Lynch regains the advantage, but Sena contacts Elbow Drop and counts in two. Lynch applies DDT, takes it to the corner and takes height for a Leg Drop and counts in two. Disarmer from Lynch, Roll Up from Sane and count in two. Sane's DDT and count in two. They go to the ropes and Lynch takes the opportunity to tip his kicks. Lynch gives Asuka a right to push her away. Disarmer for Sane and give up.

The Viking Raiders (c) (with Samoa Joe and Kevin Owens) vs. Seth Rollins and Buddy Murphy (with AoP)
Erick and Rollins begin, but Murphy enters at once. Erick's Jumping Knee, Ivar arrives and attacks with Body Slam and throws Murphy. Owens and Joe attack AoP who was on the ropes and assemble the brawl. After commercials, Rollins and Murphy combine to punish Erick. Murphy is thrown out followed by Rollins, but Ivar is punished at ringside. Murphy returns with Superkick and Slam. Enter Rollins and apply Frog Splash for the account in two. Tag for Murphy who mocks Erick and continues with kicks, but Erick returns an accurate knee. Ivar and Rollins enter, the first clean the house. Senton for Rollins and Clothesline for Murphy. Combination with Erick, but Rollins manages to save Murphy. However, Ivar and Erick throw themselves with a Dive. Enter Ivar, Viking Experience and count in two. Rollins knocks down Erick, Ivar Rollins and Ivar remains against Murphy in the corner. Rollins takes the tag and punishes Ivar with kicks. Powerbomb between them and Ivar manages to get out. Murphy enters and combines with Rollins, but Ivar reverses the situation, tag for Erick, Powerbomb to Murphy, but Rollins throws Ivar against ringside. Erick receives Murphy's knee. Rollins applies Curb Stomp behind the referee's back, Murphy covers and counts three.

Big Boot and Chokeslam of Rowan for the count of three.

Morgan starts the action against Lana and goes over the corner. Wool kick and count in two. Wool suplex and count in two. Exchange of blows and the females fall. Enter Rusev and Lashley, the former quickly dominates with Belly to Belly Suplex. Lana distracts Rusev, Lashley attacks by surprise and counts in two by Morgan's intervention that he also takes out in Lana. Morgan's kick to Lashley, Rusev and Lana's Superkick grabs his leg so that he receives a Lashley Spear and the count reaches three.