Amit 3.2.20 0 Comments
Last night the final of the Super Bowl LIV between the Kansas City Chiefs and the San Francisco 49ers was lived, a game in which a cluster of stars from other sports and shows turned completely, including WWE superstars. 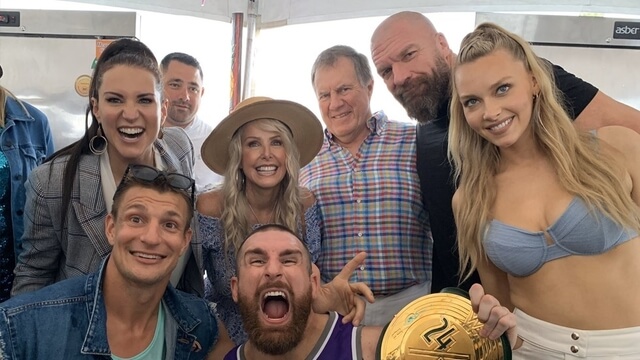 One of WWE's rivalries that went through the NFL was that of Baron 'King' Corbin and Roman Reigns. The Big Dog crushed the WWE king in recent weeks. First, with a victory in the Royal Rumble Last Man Standing match and second, in the last episode of Friday Night SmackDown, where Corbin lost his team fight and ended up eating dog food. But when it comes to American football, Corbin took the victory with the triumph of the Kansas City Chiefs. Last week, in WWE Backstage, Roman Reigns was the special guest and overturned with the 49ers, but the shot went through the butt and Corbin has finally consummated his revenge.

Triple H and Stephanie McMahon also attended the Sun Life Stadium in Miami to support the San Francisco 49ers. Both are a classic of this type of show and try not to miss any edition. Like Roman Reigns, they had to leave with disappointment in the body for the defeat of their team.

The WWE stars were not only present at the stadium but also appeared in some ads that were issued during the game breaks. Flair appeared at the beginning of the announcement of humble Sabra. Roman Reigns and Sasha Banks appeared in a Pizza Hut ad. And finally, The Rock appeared alongside Oprah Winfrey in a Weight Watchers ad. In addition, The Rock was in charge of presenting the meeting at FOX Sports.

The XFL, an American football league that will begin on February 8 in the United States, is at the gates of its return. Hulk Hogan, one of WWE's most important images internationally, took advantage of the LIV Super Bowl final to announce the arrival of the Vince McMahon project. "OK, I'm ready for #XFL Brother HH," he wrote on his official Twitter account.