Amit 2.2.20 0 Comments
Roman Reigns vs Drew McIntyre vs. Brock Lesnar seems certain to be the main event of WrestleMania 36, ​​however, WWE is also expected to strongly push another fight that has been in progress for almost a year. 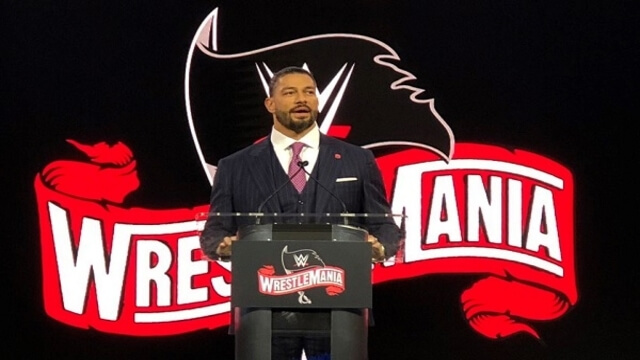 Plans for Roman Reigns in WrestleMania

From Sportskeeda.com Tom Colohue revealed in the last episode of Dropkick DiSKussions that the plan to have Roman Reigns vs. Bray Wyatt has been in process for a long time.
$ads={2}
While many plans regarding the 'Mania Poster' have changed since then, WWE has been consistent with its intention to have Reigns vs.. The Fiend

Tom Stated the following about the Match:


«MANY THINGS HAVE HAPPENED, BUT THE IDEA OF ​​WYATT VS. REIGNS HAS BEEN CONSTANT FOR A YEAR. THAT WAS THE ONLY COHERENT THING THEY WANTED TO DO. JUST AFTER WRESTLEMANIA LAST YEAR, BRAY WYATT STARTED ADVERTISING, AND IT STARTED. EVERYTHING HE DID WAS TURNED ON. IT HAS BEEN INCREDIBLY POPULAR THROUGHOUT THE YEAR 2019. PEOPLE HAVE BEEN BEGGING YOU TO HAVE MORE AND MORE OPPORTUNITIES. THE IDEA IS THAT THE DEMON COULD STAR IN WRESTLEMANIA AND POTENTIALLY BEAT ROMAN REIGNS «


«THEY HAVE TOLD ME FOR A COUPLE OF MONTHS THAT THIS IS THE FIGHT THEY ARE LOOKING FOR, THAT IS THE FIGHT THEY WANT TO DO, AND THAT IS A VICTORY THEY WANT. I BELIEVED UNTIL THIS ROYAL RUMBLE THAT WRESTLEMANIA WOULD END UP WITH THE DEMON STANDING ON THE BODY OF ROMAN REIGNS, HOLDING THE CHAMPIONSHIP. NOW YOU'RE TELLING ME THAT, AFTER EVERYTHING BRAY WYATT HAS DONE, WE PUT IT IN THE MIDDLE OF THE CARTEL AND KEEP IT OUT OF THE MAIN EVENT. AND THE WORST PART IS THAT YOU'RE TELLING ME THIS BECAUSE DREW MCINTYRE REALLY DESERVES IT TOO. THIS IS A REAL PROBLEM.


The current direction as hinted at on the television is to have Lesnar vs. McIntyre as a WrestleMania star event. With respect to Reigns, as Tom had previously reported, there is a great possibility that WWE will schedule him to lose to the Demon in the Show of Shows since WWE wants Wyatt to have a long reign with the Universal Championship.

In that case, the future of the Big Dog after 'Mania could revolve around trying to win the Universal Fiend championship & there is no guarantee that it can happen considering WWE's faith in the Wyatt project.
Tags WWE