Amit 1.2.20 0 Comments
After the Royal Rumble last Sunday, the WWE held this Friday another edition of SmackDown on the FOX channel, the first on this Road to WrestleMania, which will also have stops at the Super Showdown in Saudi Arabia, on the 27th of February, and the Elimination Chamber in early March. 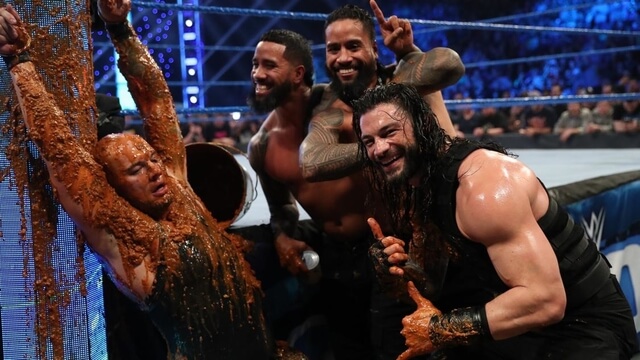 Roman Reigns and the Usos went to the ring to start SmackDown and talk until King Corbin, Dolph Ziggler and Robert Roode interrupted. Corbin said Reigns needed the help of The Usos to get the victory today.

Corbin then showed images of Corbin and Ziggler covering Reigns in dog food a few weeks ago. Reigns then added a stipulation for today: The loser eats dog food. Corbin accepted the stipulation.

The Miz & John Morrison defeated Lucha House Party, Heavy Machinery and The Revival in Fatal 4 Way. The end came when Miz hit the Skull Crushing Finale to Dawson, and Morrison hit the Starship Pain for victory. Miz and Morrison will face The New Day for SmackDown Titles at Super Showdown.

In the back, Sami Zayn, Cesaro and Shinsuke Nakamura were furious to lose the title.

In the ring, Elias said that nobody wants to hear Zayn speak. Zayn tells Elias that nobody cares and that he drops his guitar. Zayn later asked Cesaro to deal with this situation. Cesaro and Elias started fighting. Cesaro had a brief advantage until Elias dominates him, and Cesaro escaped.

SmackDown women's champion Bayley went to the ring and talked about her fight with Lacey Evans. Then he said he knows that Charlotte Flair will choose her to face WrestleMania and demanded that Flair leave, but Naomi leaves who said she wants to regain the title and wants a fight with Bayley.

Bayley attacked Naomi and tried to hit her with the belt but Naomi bent down and caught Bayley with a trampoline kick.

The loser eats dog food: Roman Reigns and the Usos defeated King Corbin, Dolph Ziggler, and Robert Roode. The end came when Reigns took Corbin in a rollup for victory.